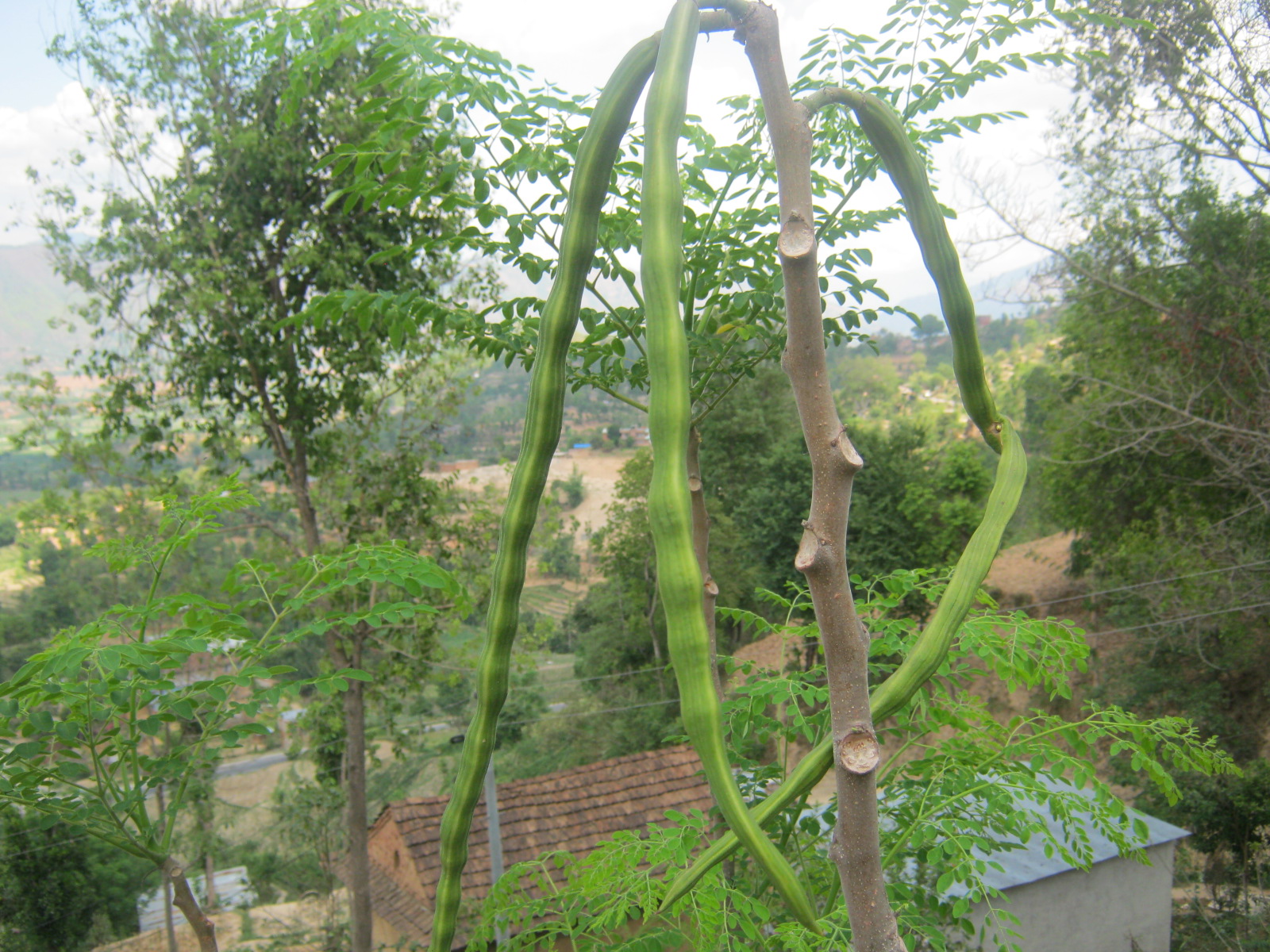 Moringa oleifera is the most widely cultivated species of the genus Moringa, which is the only genus in the family Moringaceae. English common names include: moringa, drumstick tree (from the appearance of the long, slender, triangular seed-pods), horseradish tree (from the taste of the roots, which resembles horseradish), ben oil tree, or benzoil tree (from the oil which is derived from the seeds). It is a fast-growing, drought-resistant tree, native to the southern foothills of the Himalayas in northwestern India, and widely cultivated in tropical and subtropical areas where its young seed pods and leaves are used as vegetables. It can also be used for water purification and hand washing, and is sometimes used in herbal medicine.

The tree and seedpods of Moringa oleifera in Dakawa, Morogoro, Tanzania.
By Prof.Chen Hualin (Own work) [CC BY-SA 4.0], via Wikimedia Commons

Many parts of moringa are edible, with regional uses varying widely:

Nutritional content of 100 g of fresh M. oleifera leaves (about 5 cups) is shown below.

The leaves are the most nutritious part of the plant, being a significant source of B vitamins, vitamin C, provitamin A as beta-carotene, vitamin K, manganese, and protein, among other essential nutrients. When compared with common foods particularly high in certain nutrients per 100 g fresh weight, cooked moringa leaves are considerable sources of these same nutrients. Some of the calcium in moringa leaves is bound as crystals of calcium oxalate though at levels 1/25th to 1/45th of that found in spinach, which is a negligible amount.

The leaves are cooked and used like spinach and are commonly dried and crushed into a powder used in soups and sauces.

The immature seed pods, called “drumsticks”, are commonly consumed in South Asia. They are prepared by parboiling, and cooked in a curry until soft. The seed pods/fruits, even when cooked by boiling, remain particularly high in vitamin C (which may be degraded variably by cooking) and are also a good source of dietary fibre, potassium, magnesium, and manganese.

The seeds, sometimes removed from more mature pods and eaten like peas or roasted like nuts, contain high levels of vitamin C and moderate amounts of B vitamins and dietary minerals.

Mature seeds yield 38–40% edible oil called ben oil from its high concentration of behenic acid. The refined oil is clear and odourless, and resists rancidity. The seed cake remaining after oil extraction may be used as a fertilizer or as a flocculent to purify water. Moringa seed oil also has potential for use as a biofuel.

The roots are shredded and used as a condiment with sharp flavour qualities deriving from significant content of polyphenols.

Moringa trees have been used to combat malnutrition, especially among infants and nursing mothers. Since moringa thrives in arid and semiarid environments, it may provide a versatile, nutritious food source throughout the year. Moringa leaves have been proposed as an iron-rich food source (31% Daily Value per 100 g consumed) to combat iron deficiency. However, further study is needed to test practical applications of using this dietary source and its iron bioavailability.

Moringa has numerous applications in cooking throughout its regional distribution. The fruits or seed pods, known as drumsticks, are a culinary vegetable commonly used in soups and curries. The leaves are also commonly eaten with many culinary uses, and the flowers are featured in some recipes as well.

The long drumsticks are often cut into shorter lengths and stewed in curries and soups. Because the outer skin is tough and fibrous, drumsticks are often chewed to extract the juices and nutrients, with the remaining fibrous material discarded. Others describe a slightly different method of sucking out the flesh and tender seeds and discarding the tube of skin. Traditional dishes which commonly include drumsticks prepared this way include South Indian sambar where it is stewed with lentils, and the Thai dish kaeng som which is a sour curry with drumsticks and fish.

The leaves can be used in many ways, perhaps most commonly added to clear broth-based soups, such as the Filipino dishes tinola and utan. Tender moringa leaves, finely chopped, are used as garnish for vegetable dishes and salads, such as the Kerala dish thoran. It is also used in place of or along with coriander.

In some regions of India, the flowers are mixed with gram flour and spices, then deep fried into pakoras to be served as snacks or added to curries.

Bread in Benin with moringa powder as one of the ingredients

The bark, sap, roots, leaves, seeds and flowers are used in traditional medicine. Research has examined how it might affect blood lipid profiles, although it is not effective at diagnosing, treating, or preventing any human diseases.

Extracts from leaves contain low contents of polyphenols which are under basic research for their potential properties. Despite considerable preliminary research on the biological properties of moringa components, there are few high-quality studies on humans to justify its use to treat human diseases.

Various adverse effects may occur from consuming moringa bark, roots, or flowers and their extracts, as these components contain chemicals that appear to be toxic when eaten. Moringa has been used safely in doses up to 6 grams (0.21 oz) daily for up to 3 weeks.

In developing countries, moringa has the potential to improve nutrition, boost food security, foster rural development, and support sustainable landcare. It may be used as forage for livestock, a micronutrient liquid, a natural anthelmintic, and possible adjuvant.

Moringa oleifera leaf powder was as effective as soap for hand washing when wetted in advance to enable anti-septic and detergent properties from phytochemicals in the leaves.

Moringa seed cake, obtained as a byproduct of pressing seeds to obtain oil, is used to filter water using flocculation to produce potable water for animal or human consumption. Moringa seeds contain dimeric cationic proteins which absorb and neutralise colloidal charges in turbid water, causing the colloidal particles to clump together, making the suspended particles easier to remove as sludge by either settling or filtration. Moringa seed cake removes most impurities from water. This use is of particular interest for being nontoxic and sustainable compared to other materials in moringa-growing regions where drinking water is affected by pollutants.

Use Scan QR Code to copy link and share it

Measurements can differ from country to country, so below we have outlined the measurements that we use at Aussie Taste. There is a dropdown selector you can use to have the recipe converted between metric and imperial. Most recipes have temperatures converted also.
Send this to a friend
×
Tweet

Hi There - We notice that you have an ad-blocker
Plenty of visitors do. All we ask is that you please consider sharing us or commenting on the post as a nice gesture.
Thank you for visiting The Taste of Aussie

JOIN OUR COMMUNITY
Just one step to success!
Subscribe
×
Don't Miss Out!
Stay in touch with us by receiving our monthly newsletter of new recipes and related food posts.
Subscribe Now
×
Aussie Taste
Recipe Newsletter
Subscribe to our newsletter and keep up with our latest recipes and cooking information.
Subscribe
×
Subscribe Now
Fresh berries straight from da woods. Get a 50% discount by subscribing to our free newsletter.